SAVE THE CHOCO TACO

Speed painting of a Choco Taco. As you may have heard, Klondike is discontinuing the wonderfully tasty treat, the Choco Taco. We do not approve. Save the Choco Taco, here is the link to Klondike's contact page. Email and/or call them: https://www.klondikebar.com/us/en/contact-us/email-us.html

Posted by Tia at July 31, 2022 No comments:
Email ThisBlogThis!Share to TwitterShare to FacebookShare to Pinterest
Labels: choco taco, klondike

Little Treasures original oil paintings available! Found in the menu under Shop, or click on this link: https://www.ebay.com/usr/artfulnotion

Posted by Tia at March 29, 2022 No comments:
Email ThisBlogThis!Share to TwitterShare to FacebookShare to Pinterest 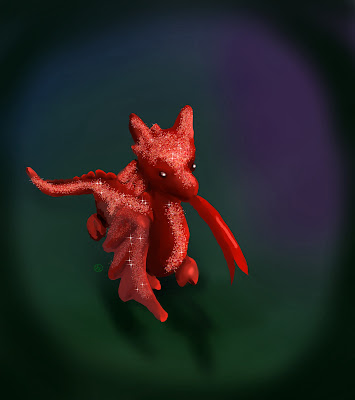 It has been a few many years since I've picked up a good old fashion Wacom tablet pen for completing a digital painting. It took about two hours to get back into the groove after many exercises and remembering how things worked.

I had stopped drawing on a computer, tablet and otherwise after completing the Snootle books. The main book took an entire year with little breaks to complete. Both books were completed on the iPad Pro first generation. You can find them on Amazon at this link Snootle. Writing those books took a toll on me, but it was worth the effort.

This digital drawing is called Little Dragon, it is a still life created on Clip Studio Pro on a Mac. Why and I doing this and not oil painting today? After two full years of not painting in oils, I found that I had lost all of my skill set, my body did not remember how to even smear the paint! So, in order to keep the skill going, practice, practice, practice.

Posted by Tia at March 22, 2022 No comments:
Email ThisBlogThis!Share to TwitterShare to FacebookShare to Pinterest
Labels: digital art

I'll Have a Burger, Please 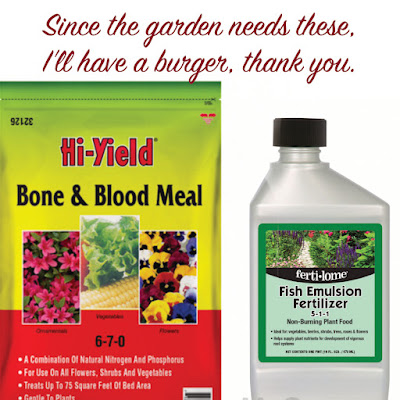 I will not always share memes and jokes, but when I do, I will make them myself. Welcome to Artful Notion! 😘
Posted by Tia at March 15, 2022 No comments:
Email ThisBlogThis!Share to TwitterShare to FacebookShare to Pinterest
Labels: jokes, meme 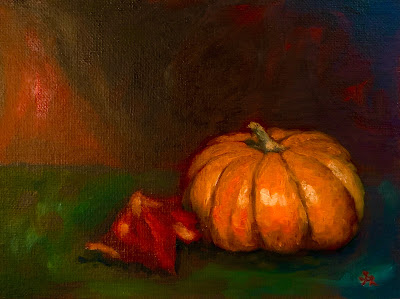 Pumpkin In Autumn is an original oil painting by artist, Anawanitia. This still life portrays a colorful impressionistic style orange pumpkin that is adorned with a red autumn leaf.

Title: Pumpkin In Autumn
Artist: Anawanitia
Medium: Oil
Size: 8 inches by 6 inches
Support: Canvas Panel
Date Completed: November 28, 2021
Signed on the back, monogram signature on the image
Unframed
This painting and others are available in my shop, located at the top of the page!
Posted by Tia at March 01, 2022 No comments:
Email ThisBlogThis!Share to TwitterShare to FacebookShare to Pinterest 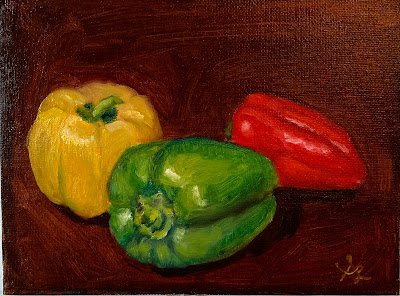 Three Bell Peppers is an original oil painting by artist, Anawanitia. This impressionistic still life portrays a colorful array of yellow, green and red bell peppers.
This is an 8-inch by 6-inch painting, created with professional artist’s oil colors. The support is a 100% cotton canvas on a contemporary canvas panel. The picture is unframed.
This artwork is hand painted, and is one of a kind.
Title: Three Bell Peppers
Artist: Tia Petty
Medium: Oil
Size: 8 inches by 6 inches
Support: Canvas Panel
Date Completed: February 27, 2022
Signed on the back, monogram signature on the image
Unframed
The artist photographed the artwork to the best of her abilities, but please note that all monitors and screens display colors differently.
Please visit my shop for available paintings!
Posted by Tia at February 28, 2022 No comments:
Email ThisBlogThis!Share to TwitterShare to FacebookShare to Pinterest
Labels: bell peppers, fine art, impressionism, still life

Knowing when to stop painting sometimes is difficult. I was planning on noodling this painting until forever. Doing that would risk an over-worked look. This is more of a painterly impressionistic style, and like how the bulbs turned out. The whole painting looks pretty good on its own, so that is where it was left.

What I love about this oil painting, called Spice of Life, is that a different palette of colors were used. My main palette consists of five pigments including titanium-zinc white, ultramarine blue, burnt umber, Winsor Yellow (Hansa PY74), and Winsor bright red (pyrrol red PR254). But in this case, the colors are titanium-zinc white, burnt sienna, viridian, yellow ochre, ultramarine blue and ivory black (all Gamblin). These colors were easy to work with and had no trouble mixing the reds from mixing burnt sienna and yellow ochre. It was magical!

Posted by Tia at December 06, 2021 No comments:
Email ThisBlogThis!Share to TwitterShare to FacebookShare to Pinterest

The Editors Chapter One 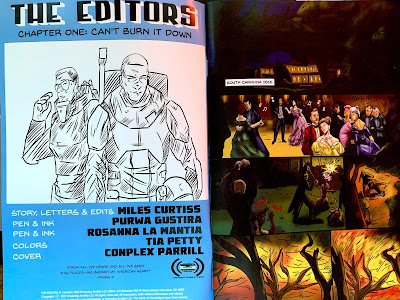 The Editors, Chapter One: Can't Burn It Down. This is a comic book written by Miles Curtiss at Dreaming Ansible, dreamingansible.com. He hired a team of artists to realize this comic. I was honored with being hired to do the colors! 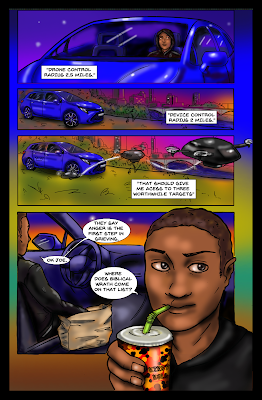 The coloring is different from most comic book colorists, as my background in the art world is traditional oil painting and comic strip art, as seen in my Snootle comic strip and cartoons. I really wanted to mix the two styles and bring full dynamic colors to the comic book world. 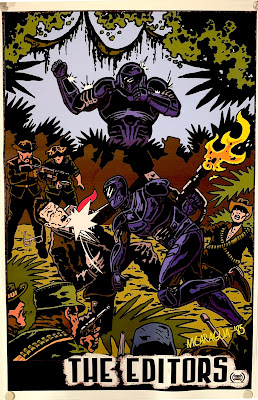 The poster was a surprise, as I thought it was going to be a back page. But seeing this artwork in full size is a treat. Different from my usual color work, I was looking to give a bit of a nod to the older generations of comics, with flatter colors.

The story in The Editors is unique and profound. Here is a teaser: Best friends Brad Lee and Gabe Quesada go on a bloody road trip through time!

If you are interested in this comic book, please visit:

Posted by Tia at November 16, 2021 No comments:
Email ThisBlogThis!Share to TwitterShare to FacebookShare to Pinterest
Labels: coloring, comic books, comics

Take It With A Grain Of Salt

This is what my day began with, this simple idiom: Take it with a grain of salt. What does this really mean? Where did the origin of the phrase come from? Was the original meaning different from how we use it now?

In the Merriam-Webster Dictionary, the meaning states: “a skeptical attitude–used in the phrase take (something) with a grain/pinch of salt."  Also stating that the first known use was in 1647. It does not state the who, what or where it was first used.

Wikipedia states “To take something with a “grain of salt” or “pinch of salt” is an English idiom that suggests to view something, specifically claims that may be misleading or unverified, with skepticism or to not interpret something literally.”

Wikipedia further suggests the phrase origin was in C. Plinii Second Naturalis Historiae, Tomus Primus 1669 book referring a grain of salt being one of the ingredients to an antidote for poison. But because it was of Latin origin, both ‘salt’ and ‘wit’ derives from the same word, sal. Therefore it could also translate as ‘with a grain of wit’ or simply, be cautious.

In a book, called Celtic Folklore by John Rhys, dated MDCCCCI (1901) page 292, says that if one is carrying a fish, that  they ought to “put a pinch of salt in the fish’s mouth before setting out, for the Manx fairies cannot stand salt or baptism. So the children that have been baptized are, as in Wales, less liable to be kidnapped by these elves than those that have not.”

This got me thinking about the Bible and how salt is sprinkled through out. As I set my eyes on a warm glowing Himalayan salt lamp, immediately thought of pillar of salt. This is not ‘a pinch of salt’ but am now a little disconcerted about that pillar of salt lamp sitting next to me now. Moving on…

Mentioned several times in the Bible is meat needing to be salted when making an offer to the Lord, such as Leviticus 2:13 and Ezekiel 43:24. Could pinch of salt be referencing that?

There is also the idea about taking a pinch of salt with food makes the food easier to swallow in folk remedies. Could it be it is referring to Job 6:6 “Can that which is unsavory be eaten without salt? Or is there any taste in the white of an egg?” A pinch of salt really does make eggs taste heavenly.

Or is it more superstitious in nature? Something that all superstitious people do is sprinkle some salt over the shoulder. Why do we do this? It is believed that spilling salt brings about the Devil, but can be nullified if you throw a pinch of salt over your left shoulder using your right hand. Foolish, but guilty as charged–I do this almost every day.

Or perhaps, a grain of salt could be referring to money. Salary also derives from the Latin term sal, meaning salt, which in this case was indicative of a Roman soldier’s wage in order to purchase salt. In that regard, take it with ‘a pinch of salt’ would mean ‘do not invest too much into it’.

On this note, there is a book called A to Z (e)Book of Dreams indicates that dreaming of salt is a symbol of wealth, truth, and longevity; but if you are salting meat, it signifies debt.

We all know that salt cures. In the book Healing With Whole Foods it states “Salt has the most “grounding,” descending activity of any substance used as food. It can greatly influence all the rest of food preparation. In the Ayurvedic tradition, the active quality of salt was emphasized as markedly strengthening one’s energy—to the point of hostility if overused.” So perhaps this means ‘pinch of salt’.

What do you think? Let us know your thoughts in the comments below!

If you are interested in my original oil paintings, please visit my art gallery or, for available works, my eBay shop.

Posted by Tia at October 29, 2021 No comments:
Email ThisBlogThis!Share to TwitterShare to FacebookShare to Pinterest
Labels: oil painting, philosophy, salt

This is the first oil painting completed in more than two months. I was doing other art, which I'll share with you all at a later post. The pumpkin was a gift, and such a beautiful orange, it screamed 'paint me!' 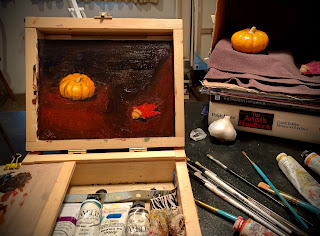 A couple of years ago, I found this lovely little paint box on eBay. It was made by R. Abbey from England. He made these little boxes for his wife, and eventually made it for the surrounding art shops. Funny, it ended up in a Colorado art shop, and has been used ever since.

Also different, is the discovery of how amazing shadow boxes are. It is really helpful in focusing and setting the stage for art. After all these years of painting, it's one of those things you find out many decades later.

Please visit my eBay shop for Little Bits of Fall and other paintings. The link is in the menu bar.
Posted by Tia at October 17, 2021 No comments:
Email ThisBlogThis!Share to TwitterShare to FacebookShare to Pinterest
Labels: oil painting, paintboxes, still life
Older Posts Home
Subscribe to: Posts (Atom)